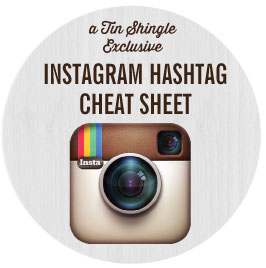 If an photo is posted to Instagram without a hashtag, does it make a sound?

It happened, it finally happened.  You landed a feature story in a press outlet you have been pitching tirelessly (and strategically) for ages!  You want to sing it from the rooftops as well as across social media, from Twitter to Facebook.  You want to tell your friends, family, landlord, dog and mailman to keep their eyes peeled for

Extra, Extra! Read All About It!  This past week I had the pleasure of sharing some Tin Shingle-approved tips with USA Today regarding  small business owners, and how (and why, really) they should make time for social media in their own businesses.

The gauntlet has been thrown down...  A challenge is underway... You are invited to join in...And the best part?  This challenge, should you choose to accept it, will better your business, your outreach strategy, and by default, your life.  Have I whet your appetite yet?  Here's the deal:

I am a self-professed Pinterest addict (this past year was a slipperly slope into total obsession) but don't you think that my love of the social networking site is purely personal!  Sure I stockpile recipes, create virtual

I'll admit it: I do nearly all my #SmallBizStyle shopping online, and a large majority of it is influenced and inspired by two things: blogs and Pinterest.  Now discussions on online conversion rates (in terms of blog reviews leading to online purchases) is no new concept, but my own realization a few months

Guess who made this panic graphic...not the Tumblr/Yahoo haters, but Yahoo's CEO, Marissa Mayer. For her Tumblr blog. Which she named marissamayr.tumblr.com - misspelling her last name by dropping the "e" in keeping with Tumblr and Yahoo owned Flickr.

If I had a dollar for every small business I encouraged to create a blog, I'd be getting myself a little "high five" in the form of this sassy little puppy.  But alas, I personally feel like all too often I see companies that aren't taking advantage of this powerf