Was Sweet Briar's Decision to Release Their Closure Announcement Via Facebook an Epic Fail? Or an Inevitable Train Wreck. 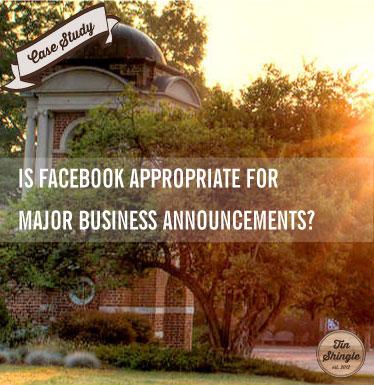 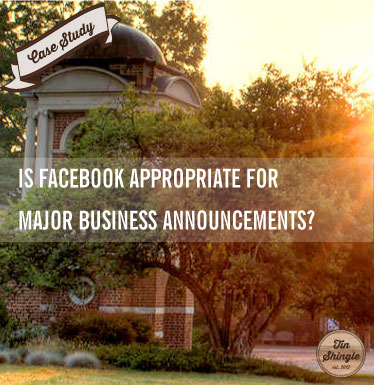 Moments after Sweet Briar College, the liberal arts college located on more than 3,000 acres of lush Virginia fields, posted to Facebook their announcement that they were closing, my phone blew up with texts from an acquaintance declaring that Sweet Briar had just committed a Facebook Fail and needed help. In the time it took me to finish what I was working on and head over to check it out, Sweet Briar's website server had crashed with the influx of irate and beyond disappointed parents, alumni, teachers, students, and passersby who were giving their two cents on Sweet Briar's Facebook wall. Everyone, including teachers, staff, students, parents and alumni, had just learned via 71 words of a Facebook message that this semester would be the last, and that the 2015 graduating class was the final one. You can imagine how they felt!

But was this a Facebook Fail (which translates into "a big mistake made on Facebook that will upset followers and most likely leave you filled with regret")? After all, the marketing department, if it indeed was a department and was perhaps a think tank of 1 or 3 staff or consultants, at Sweet Briar needed to get out a message far and wide, so they put it on Facebook to let everyone know at the same time. No personal phone calls or letters sent days or weeks in advance. The closest thing to a personal touch was a video and a special page dedicated to "transition" information to direct everyone to on their website. Seems an efficient and effective way to get the word out. But was it? How should a college let its core audience of staff, students, parents and alumni know that it is going out of business?

Being that Tin Shingle educates businesses small and large about ways to get the word out about all aspects of their business, we want to hear from you whether or not you think that announcing the closure at one unified time was the right decision. Letters were sent in the mail, and email was sent, but all happened at the same time as the Facebook update was published.

This article will explore the Facebook announcement tactic, and focuses only on the communications component of Sweet Briar's current situation. There is a huge movement to save the school, and lawsuit to block the closure, so there are some who may answer that the announcement never should have been made in the first place. But if a college had to close, would a single announcement timed at the same time, with Facebook inevitably reaching people the fastest, be the best method of delivery? Or would a tiered, more personal approach be better?

Sweet Briar College is in the national spotlight with national media stories on CBS, NPR, Business Insider, local media and more, and is the subject of a new lawsuit aimed at saving the college not only because it is a beloved college, but because it is making history as one of the first colleges to abruptly close due to "insurmountable financial challenges" during a known and much documented crisis in higher education. We are watching a communications precedent being set on many levels. It's not like colleges go out of business every day. Let's discuss:

HERE'S WHAT HAPPENED
On March 3rd, 2015, the communications people who run the Facebook page for Sweet Briar College announced that the school would be closing. Forever. This was the first piece of communication that most people received about their futures. 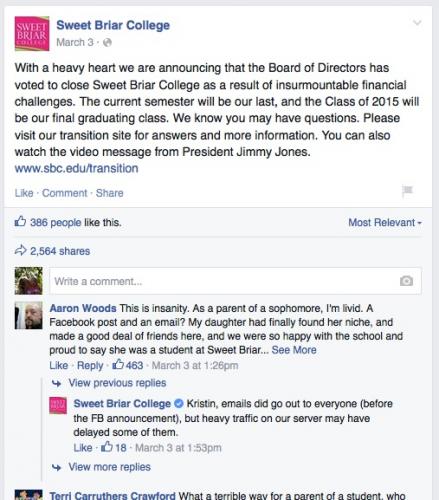 The communications folks made a video and a special "Transition" page on their website, which featured the college president and a few other notable people talking about the financial situation and how this was the hardest decision they have ever faced.

A VIDEO AND UPDATE TYPED WITH "A HEAVY HEART" ARE GOOD ENOUGH, RIGHT?
A video and a special page in and of themselves are a good strategy. The communications folks may have wanted to "control the conversation" by having one piece of communication go out at the same time, instead of several hundred or thousand letters to students, parents and alumni which would result in several thousand phone calls and emails coming at different times. Not to mention the teachers, who also learned via Facebook post that their jobs were soon ending.

What would you have done? Facebook post? Or something different, like a letter in the snail mail, or an email, or phone calls days before posting to Facebook? Or would you have feared that sending letters and calling people like newly enrolled students would have resulted in them hitting your Facebook page first before you made a proper announcement to it?

HERE'S WHERE THE PLAN GOES AWRY - THE WEBSITE CRASHED
The only mode of communicating the massive change crashed. Right away, people want answers and want to know what is happening next. Seventy-one words do not leave you with any directions on what to expect for the coming days or weeks, and a link at the end of it only leaves you with tepid hope. Snail mail (and letting people know it's coming), with a packet of information of next steps and options might have proved more efficient and effective, but that route wasn't taken.

A dependance on technology and the Internet - aka "the cloud" - was assumed, and the decision makers thought they had a well thought out campaign  getting this message out in a contained way that could control. But the flood of desperate people crashed the website. And crashed any emails that were being sent during that time. Any control of the conversation was lost moments after pressing "Post" as admin played catchup to commenters and tried to calm their audience. Which only inflamed the audience. As you can see below, "the biggest question" of where students were going next semester was reduced to coverage in rapid Facebook udpates. 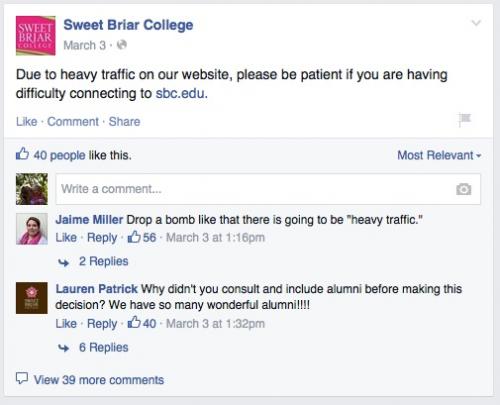 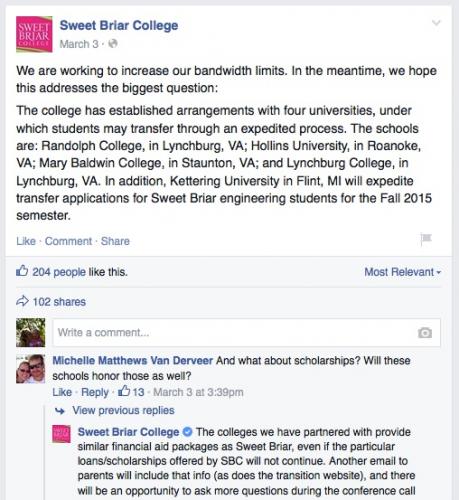 HAS FACEBOOK NUMBED PEOPLE TO WHAT IS APPROPRIATE?
We have talked about this before at Tin Shingle in our weekly in-person TuneUps on Tin Shingle (specifically this one), where the ease in which Facebook can be updated can make a business owner forget about updating their own website. Or in this case, the way in which a college might best communicate with different types of very important people in their database.

LESSONS LEARNED IN HINDSIGHT
In hindsight, the value of someone's future is really important as is the way you handle and address it. The people didn't respond well to their futures being handled in the way Sweet Briar chose. As you can see in the screenshot of "the announcement" above, one parent lamented not having a letter or an email sent to them.

Speaking of email...the admin did defend themselves saying that an email was sent, but, the email wasn't delivered because the website crashed. Which is a perhaps unintended admission that the email was in fact sent at the same time as the Facebook update was published because email relies on a website server to be working. Therefore, this admission makes the email that they sent less personal, and less of an impactful communication with those immediately impacted.

An email sent days in advance would have been more of a signal of caring. If you get informed before the public of something, you feel special and taken care of. So the admin's statement of "we sent an email" is negated by the fact that they sent the email at the same time as they posted the Facebook message. Which lends credence to the theory that the marketing folks, President and Board of Directors wanted to keep the message contained and not email, call or snail mail anyone beforehand, so as not to let the cat out of the bag when people receive the letter and then post something in advance of a public message to the Facebook page.

SO ABOUT THAT CAT IN THE BAG...
It appears that the Board of Directors and the President let only a select few know of the situation, that a closure was apparently the only solution. The people in the know may have been marketing consultants hired to increase enrollments, other consultants hired to turn the ship around, and immediate staff, as indicated in this response letter (PDF) from the President defending himself against a new lawsuit from the State of Virginia, supported in part by a new league of Sweet Briar Super Heros called #SaveSweetBriar that was formed shortly after the Facebook announcement.

As for parents and alumni, it appears they were not kept abreast of the situation. Donation envelopes were sent out as usual, and solicitation calls were made by students from call centers asking alumni for donations. As recalled by Karen Jaffa McGoldrick on her website Dressage Daily: "My heart pounded later that March 3rd, as I listened to a one hour conference call, while staring at my annual fund drive envelope sitting on my desk. I realized at that moment, that if I had sent in my check it would have been used for the 'winding down' expenses. My money would have been used to help finance what felt like an assassination."

The 2015 graduation speaker, Sweet Briar College grad and mayor of Columbus, GA, Theresa Tomlinson, gave a legacy gift of $1 million shortly before the closure announcement. She was not informed of the decision to close, and instead received a letter, fifteen days before the closure announcement as she states in this interview, from the president of the college thanking her for the donation. The letter stated that the money would be used to help future generations of girls.

SWEET BRIAR LEAGUE OF SUPERHEROS IS FORMED
Due to the shock of the situation, people not informed of any background efforts to keep the school in business were very upset and thought they could fix the situation. A "war council" was convened and a new organization was created within days: #SaveSweetBriar. Within one month of the announcement, #SaveSweetBriar has raised $3.3 million from 4110 pledges and counting and explains how funds will be used if Sweet Briar cannot be saved. I don't think strategy meetings by marketing heads and the Board of Directors expected this type of response.

WHAT'S GOING ON NOW
It's business as usual on Sweet Briar's Facebook page, with highlights of the recent Creative Writing Conference and winners of the ODAC Equestrian title. The admin of the page announced the tone shift in a post, in keeping with their conversational style, saying they were going to focus on the students: past, present and future. The post was met with backlash, to which the admin did actually challenge. 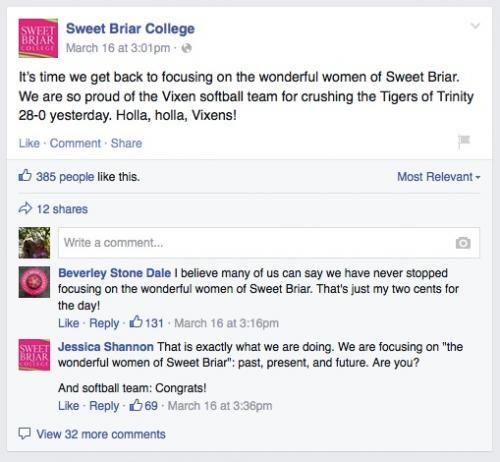 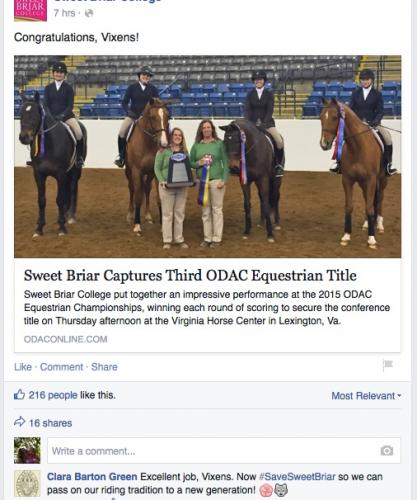 Whenever there is drama preventing someone from doing their job, which in this case is to positively highlight the school in social media, the most enjoyable thing is to just...do their job. Keeping it positive is good for those being featured, but the elephant in the room is no longer an elephant. It's a real thing that is sitting on everyone. And it's getting bigger as people comment and link-photo bomb each post with links to recent news stories about the lawsuit and any hope of reversing the closure. I would agree that a silent page would be even more awkward, but it would be honest. Either way, it's just weird.

WHAT WOULD YOU HAVE DONE?
Now, over to you, how would you have handled the situation? Please let us know in the comments below.