Steve Jobs: Tin Shingles thank you, and we will miss you 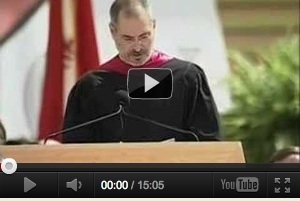 Tonight the news broke into my new schedule of trying to watch a sitcom in the evenings after a good day of work. Steve Jobs really did die, and that wasn't supposed to really happen. After the show ended, we flipped around to news networks that were memorializing Steve Jobs. As I couch potatoed , I chided myself for not getting on the computer - onto my MacBook Pro - to crank out some more Tin Shingle type work. Sometimes, when I shut work off in my mind, I won't open the computer until the morning, or bring it to bed. Too much room for distraction and deep surfing and brain sucking. I said "What would Steve Jobs do? He wouldn't stop!" But I don't know that, and I had just heard him quoted in his Stanford commencement speech that one must trust in something, so I trusted my decision to rest.

When I retired to bed, I was in the mood to read tech articles on Mashable or SEOMoz or something, from my iPhone (I allow the iPhone, but not the laptop). It occurred to me to pay homage to Steve Jobs on my Twitter. Then I read some other homages. Then I realized our company, Tin Shingle, home to and advocate for all entrepreneurs, needed to make a statement. But I had that earlier problem where I'd vowed to not open my computer for the night.

Enter the beginning of our homage: I can blog from my iPhone. Even though the experience is a little clunky because the WYSIWYG isn't displaying so I have to type in code view and create my own line breaks, Steve Jobs enabled this flexibility.

Thank you Steve Jobs for (and these are only a few of the many life changing things you've done):