Snagged: USA Today & the Winning Pitch that Got Palmetto Cheese In! 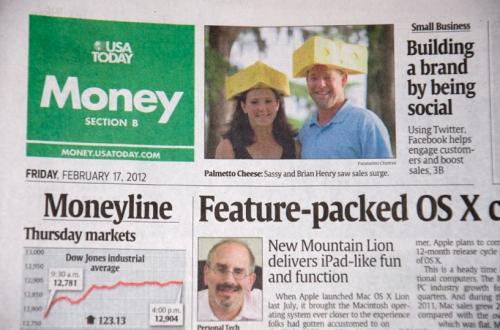 We love sharing small business press success via our new Snagged blog series, and as of late we've had so much member success that the series is backlogged (we're talking loads of new success stories to post), which is quite a good problem to have!

This latest post, however, will be the first of its kind in the series as we're not only celebrating a major press moment in the life of a small business (USA Today feature: see HERE), but we're also sharing the winning pitch that the brand sent in to snag the story, and a few lessons we can learn from their submission.

Here's the background you need to know:  Tin Shingle is happy to have cultivated a great relationship with members of the press who know they can turn to us not only as experts in the world of small business but also a a source they can use to pull entrepreneurs, small businesses & their anecdotes for upcoming stories.  This is exactly what happened this month, when USA Today reached out and let us know they were doing a story on social media and its impact on company growth.  We immediately put out the call for companies to submit their own stories, and received a slew of responses, all of which we forwarded on to the reporter covering the story.

Within minutes she asked to hear more details about a few of the submissions and also to be connected to one member in particular, and that was Palmetto Cheese, a pimento cheese company out of South Carolina, founded by husband and wife entrepreneurial team Sassy & Brian Henry.  They spoke a day later and the rest, as they say, is history.  Not only did the couple land a major mention in a USA Today feature, but their photo was also included in the story, a big moment for any small business!  We over at Tin Shingle were also happy to be featured in the story as well, but this post is now about us, it's about what you can learn from the Palmetto submission.

We'll admit, when we saw their initial email come through to us, we had a strong feeling their submission regarding social media would make the final cut.  "Why?", you may ask?  Well don't just take our word for it, read it below, as we received the team's permission and have reprinted it here for you.  After you read it, we'll discuss why we think it helped them land the story, and what you can learn from it....

In the beginning we used social media to give out recipes and serving tips for our product, Palmetto Cheese.  This was done to get people thinking about different uses for pimento cheese other than a sandwich.   We also posted images with our brand and the founders to introduce ourselves. While this was a great place to start, it didn't bring in a lot of followers because it wasn't creating a dialogue. There was nothing for customers to connect to.  Once we started truly interacting with our customers and created a community, we began to see an increase in interest and customers.  What did we do?

• We educated and empowered consumers on how to bring Palmetto Cheese to their grocery store.
• Social media was used as a platform for instant customer service.
• Giveaways for coupons and promotional materials got customers/fans interacting on a daily basis.
• Providing links and videos about new locations to purchase our product brought in new customers and fans.

Our social media education is ongoing and is purely trial and error. It's all about finding that niche that the customer is interested in. Social media changes continually, so we try to stay on top of the newest trends and give our customers the human connection they expect.

Well there you have it, the curtain was drawn back and you were able to see just what it took to get Palmetto Cheese into USA Today.  What surprises some people is that it wasn't a three page submission, it was much shorter than many other emails we received, less truly was more, and yet what they wrote was enough.  Use this as a guide to and lesson for your own responses to reporter queries, and stay tuned to some more Snagged posts in which we include the actual winning pitches that entrepreneurs like you used to tell their story.