Snagged: Fox Business News Features TWO Members in their Made in America Story 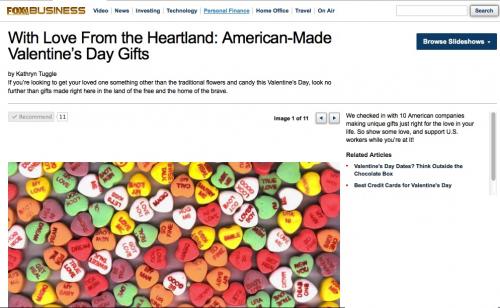 Just as the news is on a 24-hour cycle, PR leads can come at any time, and as we say time and time again, the early bird often gets the worm.  What we also like to say is, "don't give up, answer those leads!" as you never know when the next PR lead you answer could be a slam dunk for you!

So was the case just last weekend, when Fox Business News put out the call for Valentine's Day products that were "Made in America", something we knew several of our members could provide.  Wasting no time, our PR team uploaded the lead Saturday evening and spread the word about it via our social media channels and private member email group.  Within seconds, jewelry designer Peggy Li was on the case, along with several members who let us know they were off to the PR races. Way to be on your email entrepreneurs, you never know when your next big break could strike! That's the thing about PR, timing is a big part of it.  (That's why it's good to have pre-written pitches about your brand, expertise or product ready to go!)

Well the hustle of TWO members paid off, as when the story went live, not one but two of our members were featured in the story, which you can read its entirety HERE. Peggy was joined in the story by fellow jewelry designer Emily Elizabeth Jewelry in this amazing placement, giving them both wonderful national buzz fromo one of the country's biggest news networks!