This week’s #SmallBizProud vid-spiration is all about overcoming obstacles and following the love of what you do! From a small business that makes apps to help solve problems for other small businesses, to former college suitemates at the helm of their own women-run business, it’s all about the love of running your small business and the passion to overcome challenges that keeps these #smallbiz superstars going. You can’t not be inspired by the story of a dry cleaning company that rebuilt after a five-alarm fire and the lessons they learned along the way. For a family-owned nursery that has been in the family for four amazing generations, the reward is the pride they take in serving the community over the decades. This week’s small business owners are here to tell us that sometimes the point isn’t to make a huge fortune; sometimes you hang in there when the going gets rough for the love of your small business. And, at the end of the day, the pride you feel at never giving up is more valuable than all the money in the world! 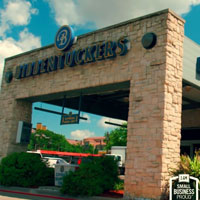 Bibbentuckers: Dallas, Texas
A five-alarm fire and a five-million dollar loss would be enough to stop a superhero in his tracks. But, for John Palms, President and CEO of Bibbentuckers Dry Cleaning, “failure was not an option.” Well aware of how many people depend on the company, from employees to customers, John knew he had to rebuild. Crediting what he calls a “survival instinct,” he and his team pulled together and rebuilt the store in eight months. When a disaster of a different kind--the recession--struck, John still didn’t give up. Instead, he and his crew worked with more determination, willingness and tenacity than ever to grow and be a bigger brand. Today, they believe in themselves even more and John feels that, in a way, the challenges they faced have helped lead to more growth. He says, “you’ll never meet that ultimate wall where you just stop. You’ll always find a way to around the wall, over the wall.” 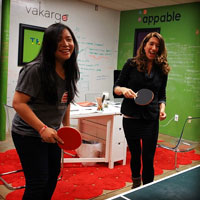 Appable: Oklahoma City
What’s “the coolest thing” for Kelly Tran, CEO and Founder of Appable, going back to when she was in the second grade? Coding! Born in Vietnam, Kelly was drawn to technology from a young age and, with the encouragement of her parents, started coding as a child and never looked back. She started her tech company, Appable, to create apps that “solve the smallest problem in the most creative way” for other small businesses. Appable gives people the ability to turn ideas into an actual app! Their core focus is building software that has the best user experience out there. A self-proclaimed “passionate problem solver,” Kelly is made for the work she does. As she puts it, “I’m so in love with the work that I do everyday!”

Get to know Kelly and prepare to be inspired by her passion and enthusiasm: 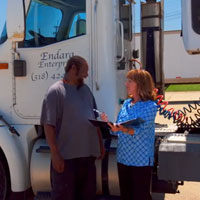 Endara Enterprises: Shreveport, LA
“Life is short and you gotta make the most of it” is the motto of Mary Jo Grey, Vice President of Endara Enterprises who runs the company with her business partner Rubby Endara Gregg. Founded in 1990, 100% women-owned and certified minority-owned, this impressive business is built on the amazing relationship of Mary Jo and Rubby. Former college suitemates who stayed in touch over the years, from the day Mary Jo and Rubby decided to start their own company it was a #smallbiz match made in heaven. The secret? Both are in love with their work, and each plays to their strengths (as Mary Jo puts it, Ruby is definitely the “tough love” side of the biz). Mary Jo, who always “gives 200%,” is frank about the bumps in the road they’ve had along the way. But their passion has kept them afloat, and they reap the rewards every day doing what they love on their own terms, together!

Meet Mary Jo and hear what makes her business thrive and her formula for success: 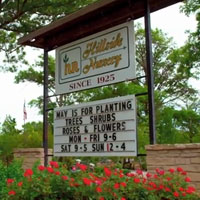 Hillside Nursery: Wichita, KS
The history of Hillside Nursery stretches back 90 years, entwined with the family tree of owners Matt and Mark McHenry, whose grandfather hand-built three of the greenhouses. Started in 1925, Hillside Nursery has been in Mark’s family since 1948. Being third generation means Mark and his team really know the plants and their community: some of their customers are grandchildren their grandparents’ customers! They pride themselves on handling all aspects of production in the eight acres in the middle of the city and being a part of Wichita: when Mark drives around town, he can see trees planted by the nursery 50-60 years ago, growing and thriving. Mark states that he doesn’t have this job to “get rich,” but as you hear the pride in his voice as he describes what it’s like to do a final walk-through at the end of a long day, it’s clear he’s a rich man in the greatest sense of the word. An amazing story of a third and fourth generation family business rooted in their community that is guaranteed to move you!

Get to know Mark and his exceptional family legacy:

Capital OneDisclosure: The #SmallBizProud content series is sponsored by Capital One Spark. The opinions expressed herein are those of the author and are not indicative of the opinions or positions of Capital One.