The second-largest state in the country, the great state of Texas is home to an adventuresome, can-do spirit. And, as we’re learning from the #SmallBizProud campaign, the “Friendship State” is a true friend to spirited small businesses of all kinds! From companies that reinvented the light switch (it’s shocking that it took so long, but not surprising that it took an entrepreneur to do it!) to immigration lawyers inspired to help others by their own experience, we’re nothing short of amazed by the small businesses that have planted their flag in the Lone Star state.

With so many exciting videos to choose from, we narrowed this week’s round-up to two husband & wife teams and two committed and passionate small business owners who wouldn’t give up. All of them wow us with their dedication, innovation and courage. After you read their stories below, check out the entire journey through Texas here and be prepared to tip your hat at the great #SmallBizProud spirit that lives in the great state of Texas! 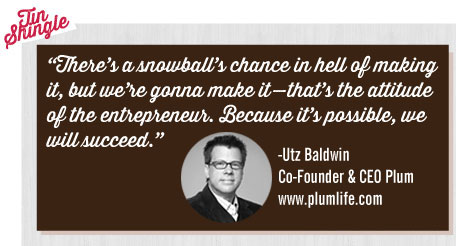 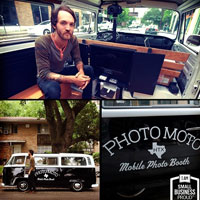 PhotoMoto: Austin, TX
Combine a childhood dream and savvy business sense with one couple’s can-do, go-for-it spirit, and you get one of the greatest business ideas on the road: PhotoMoto HTX. When Austin Havican and his wife, Brittany, a photographer, were struggling for a reason to justify buying a 1978 Volkswagen bus--a dream of Austin’s since childhood--Brittany brought a creative solution to the table. While shooting weddings, Brittany had noticed the popularity of photo booths, brought in and installed at receptions and had been wanting to expand her own photography business in that direction for some time. An idea was ignited: what about a mobile photo booth? The couple decided to go for it and buy the bus. With an article Austin had found about an Englishman in the 60’s who had built a photo studio in his double-decker bus, Austin got to work transforming his four wheels into a photo studio. Today, PhotoMoto brings photo-fun to weddings, events, festivals and more. But what is the most rewarding part of the job for Austin? As much as he enjoys meeting new people, spreading the fun and earning a living at what he loves, his favorite part of his day is still cruising in his VW bus. Get on the bus and get to know PhotoMoto here. 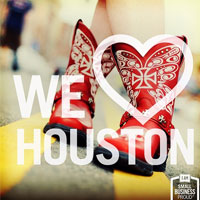 LCD Concepts, Inc.: Houston, TX
There aren’t many small businesses whose favorite product story involves a stranded oil rigger submerged in the middle of the ocean. But for Nancy and Brian Olson, creating a product that can withstand harsh environments is their pride and joy. Their company, LCD Concepts, produces watertight screen monitors for use on sailboats and other vessels that can be trusted in the most trying of circumstances including hurricanes; currently, they are completing an order for the US Navy. Even more amazing? All their products are made by hand. A team of two, this couple is able to make it work by steering the business in the direction of what they do best. Nancy handles the sales and marketing side, and Brian gets his hands dirty with the mechanics in product development, a love of his since childhood.  As he says, "When I was 6 years old I was doing this stuff, creating and building and doing things with my hands." With LCD Concepts it’s been a plan for success and happiness from the get-go. Says Nancy,: "I love it. I enjoy the environment. We have such a vision, where the sky is the limit. And we share that vision."  Doing what you love and sharing the vision: keys to any good relationship, inside and outside of work.  Watch their full story here: 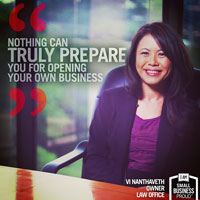 Law Office of Vi Nanthaveth: Austin, TX
The seeds of Vi Nanthaveth’s small business dream were planted when she was just a little girl. Born in Vientiane, Laos, Vi immigrated to the United States with her parents and spent time in a refugee camp before settling in a small town in Louisiana. During law school, she discovered immigration law, and it quickly became her passion. It wasn’t long before she decided to take the leap into starting her own law firm. At first, it was a shock; starting your own business, as she puts it, is something that no school can ever prepare you for, and she has “a few scars from learning along the way!” But she hung in there, and today feels that being small business proud is “in her blood” (both her parents were business owners back in her home country). Today, Vi loves the aspect of her job that allow her to meet and help different people and families from all walks of life in a truly rewarding career. Meet Vi and learn from her inspiring story here: 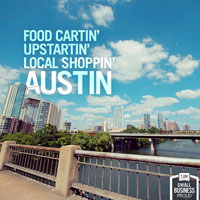 PLUM: Austin, TX
It takes the bold spirit of an entrepreneur to reinvent something that hasn’t changed for the last 100 years! Where some people only see a simple “on/off” switch, Utz Baldwin and his team saw one thing: change. Utz was working on starting a completely different company, a software company, when he decided to fast track the light switch into the 21st century and transform it to be wifi-smart. As Utz puts it, “intelligence and connectivity” is the “logical next step” for the light switch. And people agreed: PLUM beat out 77 other competitors in a Silicon Valley start-up competition and won the top honor of a million dollars in funding. They then launched themselves into the world crowd funding and raised over $300,000. Utz is grateful; he feels connected to “each and every one of the backers” and notes that their level of support and faith in his company is nothing short of profound.  It’s true that the percentage of start-ups that make it is 1%. But, as Utz says: “there’s a snowball’s chance in hell of making it, but we’re gonna make it—that’s the attitude of the entrepreneur. Because it’s possible, we will succeed.” Learn more about Utz and his story here:

Hungry for more inspiration from our past coverage of #SmallBizProud?

Watch Trisha and John recap their trip through Texas and Louisiana.

Disclosure: The #SmallBizProud content series is sponsored by Capital One Spark. The opinions expressed herein are those of the author and are not indicative of the opinions or positions of Capital One.