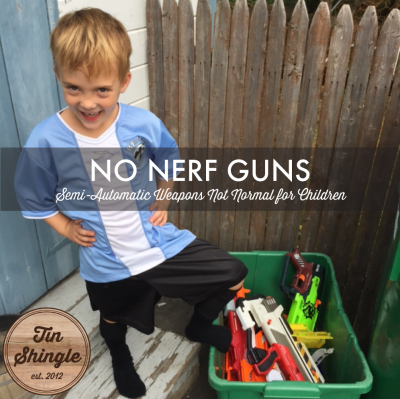 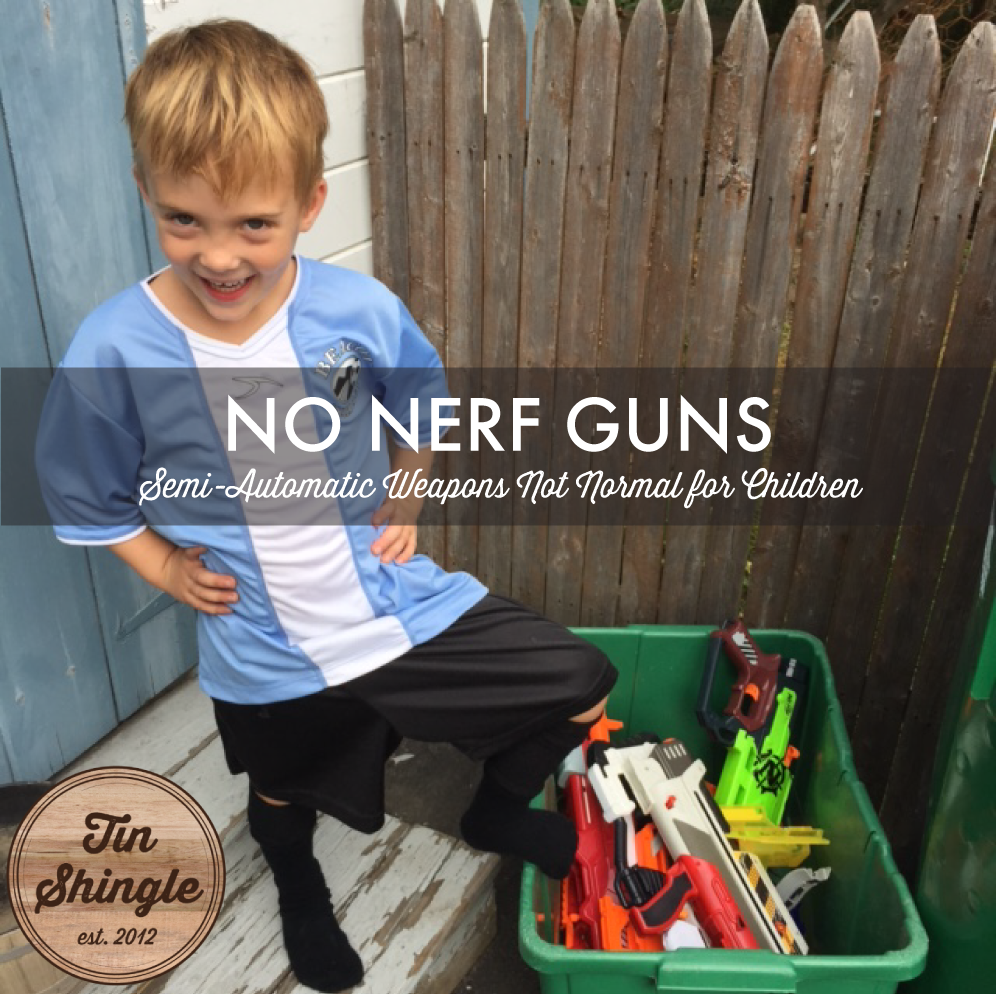 When my 4 year old son experienced a semi-automatic Nerf gun at his friend's house, he was enamored. It was all he wanted for his birthday. Several YouTube videos later (we do let our kids browse YouTube and several family-based producers of content have Nerf gun wars between father and son and other games), Nerf guns were all he could talk about, and wanted the cross-bow for Christmas. Rather than resist this request, which could create a complex where he craves what he cannot have, we indulged. Now, they are all in the trash (well, recycling), to be melted down and taken out of circulation. Nerf guns are a contribution to the desensitizing of all people about guns, and we are doing our duty to stop it.

Fifteen semi-automatic Nerf gun weapons are in our home, and words in his vocabulary include "magazine," "aimer" and "pistol." After the Las Vegas shooting, when I spotted the double-barrel rifle Nerf gun on the floor, I was creeped out. Normally it's just an object that needs picked up and placed into the appropriate bin to keep the house clean. The next day, the kids' school had a scheduled Lock Down Drill, where the kids are trained to hide in a closet and be quiet when an intruder is in the school. Also that day, an administrator of a local daycare had been to a free terrorist training session put on by local police officers, who encouraged teachers to look for ways to escape from the building, as well as how to buy time by distracting the gunman in the school. The mock-shooter during this drill used a Nerf gun, and shot real Nerf bullets at the teachers. That's how they knew if their strategy of hiding under a desk or passing in front of a door with a window worked or not.

The Nerf Brand is a Happy Childhood Memory, and Disguises the Seriousness of Children with Semi-Automatic Weapons

Because it was Nerf, I went along with these toys. There are other guns developed by other brands, and they all do the same thing. There's even a "toy" gun to shoot Orbees, which are a fun mystery pellet that can be used in flower arrangements, fake spa baths for kids, and as bullets. They are basically little rubber bouncy balls, so they'd really hurt if they hit you. This gun was purchased at our local, independently owned toy store.

If pro-gun advocates want to deflect the blame from guns, and put it on people, saying that video games and other things are the culprit, then video game and toy gun producers are going to feel the pinch. They won't be happy about it, and both the NRA and businesses who produce these things will deflect blame. The impact guns have on society comes down to us - the consumers - and what we buy.

What Happens When Nerf Nazis Invade Us?

When I posted this photo on Facebook, a white male friend asked:

"But what do we do when the nerf nazi's invade?"

My response to him:
"What we do is support those people who have volunteered to protect us and have been taught about guns, to fight the nerf nazi invaders. Not as a thing as a normal toy that makes pretend shooting those around you a normal part of behavior or reaction. You feel safe with people who have guns who have been trained in them. Not hoard then."

There is talk among mothers of boys and girls that mothers of boys need to pay attention to how the boys play, and if they encourage gun use. I have a boy and a girl, and I have seen them naturally gravitate towards their own interests in a stereotypical way. My girl likes baking, art, and running. She is not drawn to balls or guns. My son likes baking, balls, guns and only recently, drawing numbers on paper.

Another friend in Facebook is a teacher in a city with a high crime rate, and says her boy students make guns out of Playdough knives, and attributes it to their living conditions and exposure to real guns. She teaches them what to do if they encounter a real gun. My son is not exposed to such things, but also makes guns out of any object, including sticks, old Lego builds that can be a ship or gun, or his finger.

From my experience, my boy is naturally drawn to guns, and it's my job as a parent to keep an open dialogue about guns with him. We have begun talking to our kids about the Las Vegas shootings, and about what to do in lock downs (try to escape or hide, depending on the situation).

Children having semi-automatic weapons in their hands, sold in the Toy Section of every toy store, is not appropriate, and is desensitizing.

Join me in the real #NoNerfGun movement by talking to your kids about the seriousness of these toy guns, and why it's not OK to have them, despite the confusing message about them being in the Toy Section, which makes them OK and legitimizes them in the minds of children.