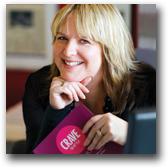 Melody Biringer is the founder of CRAVE, the guide that innovatively connects urban gals to the sassiest, gutsiest, most inspiring people they need to know in town.The idea for CRAVE came about in 2001, when a then 39-year-old, Melody Biringer realized how much she missed spending time with her girlfriends. As Melody and her girlfriends followed their various journeys through life, it was clear that their busy schedules allowed for little time together.

Melody wanted to reconnect and have fun. As a result she created the first CRAVEguide: CRAVE Seattle, The Urban Girl’s Manifesto, was published in 2002. Women from around the Sound bought copies and called their girlfriends for shopping and lunch expeditions. A movement was born.

CRAVEguides came to life in 2003. CRAVEparty rocked the Seattle social scene. Melody and her team of girlfriends designed a one-of-a-kind party just for urban-minded women, bringing together clothing boutiques, original jewelers and spa service providers for the ultimate girlfriend get-together. Hundreds attended that first party and thousands have attended CRAVE Parties since. In 2005, CRAVE expanded from Seattle and into more than 15 additional markets, delivering an excellent excuse for girlfriends to get together across the world.

Now prominent in US and international cities such as Chicago, Los Angeles, Washington DC, Vancouver, and Amsterdam, the CRAVE team is hard at work developing new CRAVEguides, bringing entreprenesses together, and spreading the word about women-owned businesses.

Check out all the CRAVE has to offer, and add a little splash to your day!

To get to know more of our members, visit our Entrepreneur Directory.

To become one of our members join today.