Indie Chick Magazine: Why You Should Help Keep it on Shelves & How to Share Your Story with Them

Starting a print magazine is no common or easy feat. Printing and distributing a magazine in a digital age where print magazines and newspapers are reinventing themselves to stay current and retain readers is quite frankly, monumentous. 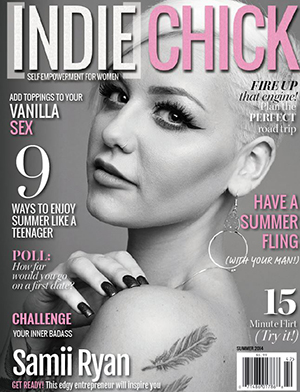 Indie Chick Magazine is such a magazine, and the print model fits its mission, which is to develop and empower a woman's inner badass. It's hard enough to launch a website that has contributing writers, photographers, editors, and any support staff. It's hard to get something physical into someone's hands, but once you do, it's usually cherished, clipped, scrapbooked, and vision-boarded.

What's unusual about Indie Chick Magazine that makes its printed product so amazing is that it was  created by one woman and her computer: Chiara Mazzucco. Chiara has one of those brains that is tapped in to both the editorial side and the design side of magazine production. Chiara taught herself InDesign, the design program she first used to produce the layouts of the magazine, and mocked up the entire layout and shipped it to the printer, all the while working with The Team at The Indie Chicks and contributing writers and photographers. Not to mention the social media they create to build their brand story, events they attend, and the radio show they produce. In fact if you want to submit your own story to them we've got the "how" below!

Running on fuel of pure passion and drive, Indie Chick Magazine is printed and distributed to shelves big and small including the Barnes & Noble. In the magazine's early days of printed ink, it's funded by blood, sweat and support. For their second issue, the articles are in, the photos taken, and now it needs a print run. True to modern forms of fundraising, Indie Chick Magazine started an IndieGoGo fund that you can be a part of to generate funds to keep it on store shelves and get into the hands of women who look to it for strength and wisdom every day.

To be a part of this empowerment movement, click here to visit their IndieGoGo fundraising campaign to see all of the cool stuff you could be entitled to as a Supporter, Inspiration, Rock Star, Muse, Visionary, Dreamer, Innovator, International Innovator, PowerHouse or VIP.

Three cheers to these innovators for making media happen!

Want to share your own story or expertise with Indie Chick?  Here's how!