Hold Your Haunches Strikes a Deal on Shark Tank! How They Got on the Show, a Breakdown 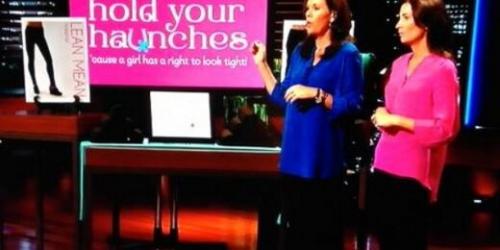 I was flipping around my social media apps in bed one night before I put my phone down to read a book (Slummy Mummy...such a good night read for those who like Bridget Jones but the married-with-kids-version), and I saw what seemed to be live tweeting of an intense run on Hold Your Haunches shapewear pants. The girls at Hold Your Haunches, who are friends of Tin Shingle and original contributors to our #SmallBizDiary series, were letting customers know that traffic from their appearance on ABC's Shark Tank was slowing their website, but rest assured, orders were getting through!

Naturally I tapped over to Google to see what was going on, and I saw tweet upon tweet from people who were congratulating Erin and Jenny, the two founders and mothers of many children, on their deal to lady Sharks Lori and Barbara. The deal was for a $75,000 investment from the lady Sharks for 40% of the business, plus a $100,000 line of credit.

I zipped over to the Hold Your Haunches blog, and sure enough, Erin and Jenny had blogged lead-ups to the show as a Part 1 and a Part 2. What is missing is Part 3, which is life after the show. Eee! And that blog isn't going to come any time soon because the #SharkTankEffect led to this, which I found on the Shark Tank Blog:

And please read in Jenny and Erin's words how this all went down! Remember: Part 1 and a Part 2.

I'd live to know part 3 of this story, in the end was the pr boost when the biz aired what they were after? If they could get meetings with VCs/investment bankers, why not take that funding? Curious about the "shark effect"!