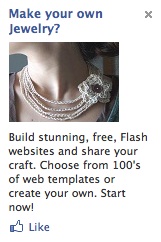 I was piddling around in Facebook, answering an email, when this ad caught the right corner of my peripheral vision. The crochet. The rose. Reminded me of some of our jewelry designer members actually. But I sent my email and navigated somewhere in Facebook, and lost the ad. Darn, I thought! I hope I see it again so that I can "like" it and train Facebook can continue to serve me up relevant ads.

PS: You can do that, you know. Train Facebook. It used to send me tons of SEO and Social Media bru-ha-ha, and I had no interest (I get my info other ways).

Anyway, so I wanted a trainable moment, and bam, the ad appeared again a few page clicks later. I went to "like" it, assuming it was for a jewelry designer, but when I read the copy, it was a for a firm offering Flash template websites that I, as a jewelry designer, could build myself. I'm not a jewelry designer, I just like jewelry, but that's ok. I certainly don't want a Flash template for goodness sake, to shoot myself in the SEO, Social Media, and mobile shopping foot. But, the ad did catch my eye, and had I not been a website designer, would I have known the difference and investigated their services?

Point is, when you are creating your Facebook ads, the picture is everything. It is the most eye catching piece of the ad. This website firm thought outside of the box, and tempted its target audience with subject matter the website company knew the audience would respond to.

Question is: did they get new customers? I think that if I was a jewelry designer looking to build a website, and if they had talked about building ecommerce websites (pretend I knew that Flash had drawbacks), then yes, I would investigate them. The feeling I'd get from the picture is that they've worked with my kind before, and would understand my needs.

There are so many ways to target your ad in Facebook, that you can afford to go very niche.