This is the fourth blog post in our series on Oprah submissions from members. Tin Shingle is doing a collective pitch to the producers for consideration in her Favorite Things. Join today to be included in other opportunities like this.

Jordan Silver, founder and lead designer of Ag Apparel, has revolutionized life for the wheelchair bound: she gives them fashion to set them free. Jordan was inspired to start Ag Apparel while watching her aunt, Janet Silver, battle ALS. Because of its debilitating effects, Jordan watched her aunt struggle to keep her independence and dignity through dress. Aunt Janet opened Jordan's eyes to the possibility of filling the void in the adaptive apparel market with not only high fashion, but accessible fashion for the wheelchair bound and others who have trouble employing actions others take for granted, like buttoning a shirt. 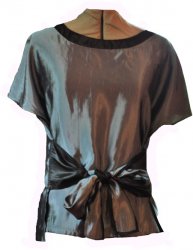 Jordan launched Ag Apparel with a seamless wrap shirt, which Jordan named the "Janet" in memory of her aunt, who passed away shortly thereafter. For this reason, 5% of all profits from the "Janet" top are donated to the Spastic Paraplegia Foundation, an organization raising awareness and finding a cure for ALS. Aunt Janet is the passion and inspiration behind the seams of all Ag Apparel pieces.

Jordan already has a large fan base, after being involved with the Ms. Wheelchair America Association, showing her collection at various Fashion Shows all over the country, and attending expos to inform major retailers and consumers about the importance of providing universal adaptive apparel to everyone in various sizes and price points.

In January 2009, Ag Apparel got its first big break when Adam Glassman of O, The Oprah Magazine exclaimed: "Every woman should have the choice to be chic whatever her circumstance, so I am excited about Ag Apparel, a line of clever separates designed for people with physical challenges."