Day In The New Life of 3 Kids Club

In honor of the day, I've revved up my Diary of Small Biz Owner blog here at Tin Shingle to give you a glimpse of a day in the entrepreneurial life of new working momhood with 3 kids. Doing any sort of piece like this triggers all sorts of reflections for me - good and bad - so let's see what comes out in this diary entry :)

Squeezing Every Ounce Out Of Every Minute 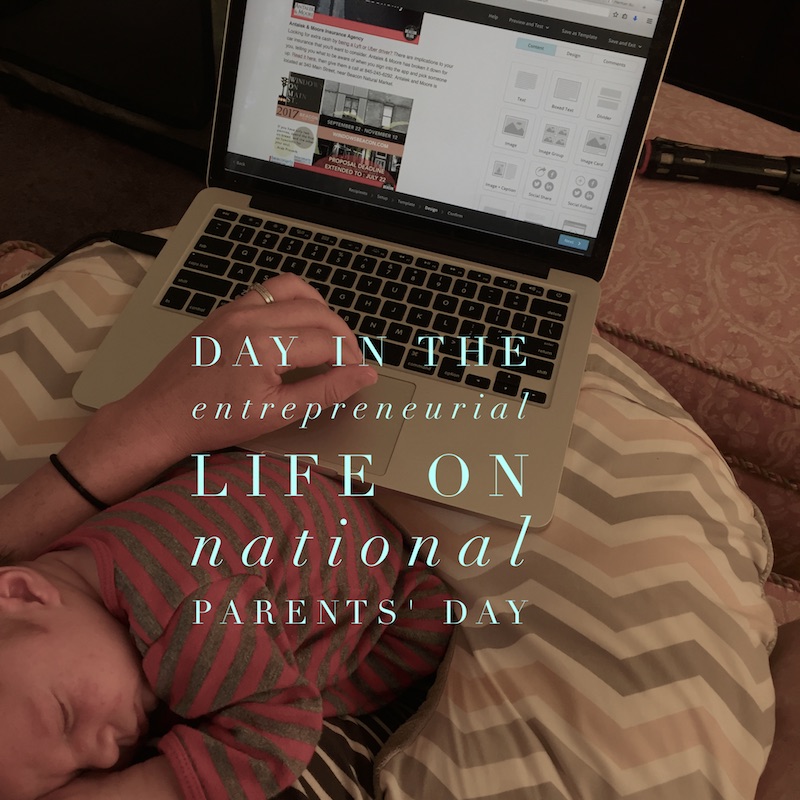 While I'm not hyperventalaing (yet) about doing things while the baby sleeps, every minute counts, so I've been making changes that get me more minutes out of every day by changing things I normally do. Like grocery shopping. I've gone the delivery route. Because really, I might not get to the store, despite my preference for in-person shopping in order to get out there in the world and see people and experience retail therapy.

Shopping online at Old Navy and Athleta are next. I know. This is normal for you, but I really love going into stores. It's so much more exciting for me to see colors and combinations, than looking at a flat screen from a room in my house, passing nothing interesting in my car while listening to the radio.

Some Things Aren't Going To Get Done, And That's OK

Each day (almost each day), I've had one Kid LIfe Goal that I want to accomplish (I have Business Life goals too, like writing an article or finsihing a website or newsletter design). I started with three goals a day, and quickly realized that only one would happen. Examples:

People on my team kept asking me - "So when are you starting Maternity Leave and what will that look like?" And I had no answer for them. My main questions for myself were:

Since my answer on that was somewhere in the middle - because working for my own business is good for me and keeps my brain in a good place - I teamed up with people - all hands on deck. I also knew this would be good for my businesses because I've done it before years ago during the DIY Daycare period when we had no childcare for the entire summer. Tin Shingle had a banner year that year, and most of it happened during the summer when I had stepped away, delegating things to experienced people.

Teaming Up - And Keeping It That Way

Tricky for me will be to stay in delegation-mode. If I am physically able to do something, I prefer to do it. But eventually there becomes too much, and the wheels get clogged. It's very important to bring people on your  team and let them shine, and know that you're going to pay them a good bit of money to get there, which is why your business needs to be built to scale up so that everyone including yourself can continue getting paid.

My daughter Ruby and I were talking about this last night. She ran a lemonade stand a few months ago, and did so with her friend. About 4 other friends joined in (some more than others including her brother...they were hanging around but not everyone actually worked the stand). Everyone got paid at the end. This time around, she wants to keep more of the money, and have no one help her (she is saving for an in-ground pool at our house...she is 7 years old).

This is a classic move of small business owners - to think that by paying no one to help, they will have all of the money. What ends up happening is, the owner gets overwhelmed with needing to be everywhre at once and answer everyone at once. Hyperventalation sets in, and business gets compromised. When Ruby had helpers, some people could run in to get more ice. Some could mix more lemonade. Some were flagging people down on the street (a form of marketing, but we had to keep him from following people). As a team, they actually made $50 from a lemodade stand that charged $.50/cup (I think they got tipped).

During my first child, I had a business partner who is no longer in my life. She was a mom and knew what was about to happen after my first child came. But I assured her that I wasn't going into a black hole, that I'd always be available. Well, I did go into a black hole - that was actually a bright place of childhood life - but problems happened, and I felt trapped in my own home because there were business tasks that were getting assigned to me that I could not complete. Even when my appendix ruptured and I was recovering in the hostipal - while on my vacation - she was asking me if I'd gotten XYZ done.

Eventually during our partner-breakup, hurtful emails were being sent. One of them said: "I'm going to tell everyone I know that you can't get things done." That hurt, yet I was past the point of caring. But I did care, and eventually shut down a portion of my business - my website design business - because it was true - it was hard for me to get designs done. There was no one except for me. It wasn't scalable, and the landscape was changing from custom-built website design to template-based DIY websites with Squarespace, Wix, and others.

Sticks and stones may break my bones, and I can move on from hurtful words, but they do sear onto my brain and I remember them forever. In order to cope with the statement, I embraced that accusation and accepted it. Yes, it was and is hard for me to get things done when I'm busy - especially when it's my children making me busy. If I don't want to shut the business, and if I do want to be there at kid-pickup and attending karate classes, I have to team up, and let others get things done that we have strategized and made into systems.

And boy do we have systems. We have shared Google Calendars and shared Google Docs all over the place. My goal now has been to be as good as my team is at sticking to the schedule. Part of that has been to create tricks for myself to see things more clearly on my own calendar, use Dropbox to share files quickly and do as much work as possible from my iPhone (from social sharing to edting photos to even writing a blog post). I've released some tasks that I have done for years - like put together and write newsletters. And guess what? They are awesome! Ashley is doing an awesome job at putting together Tin Shingle's Member Update newsletter, annd is thinking of fresh ideas that I've never thought of. This never would have happened had I not given in and released it to someone else. Not closed it or stopped it - but asked someone else to do it and trust that they understood my guidance and ran with it.

That's a day in the life from this small biz owner. It will change by tomorrow, and hopefully keep heading in the right direction :)

SmallBizDiary Category:
Lifestyle of an Entrepreneur