Tax Season Can Be Depressing Yet Empowering

The weekend before April 15th, I heard from #smallbiz friends who had rough tax experiences. One had been beat up by her accountant, and the other was given the answer that she owed a lot in taxes, much more than expected. Both experiences are scary, and I've experienced them both. One friend emerged empowered, and the other friend was emotionally sinking, wanting to throw in the towel.

Taxes and Legal can make growing a business very difficult, because they tie the business owner's hands with restrictions. And a business owner is usually a dreamer, so restrictions don't fit in well to this scenario. So let's discuss scenarios that can be depressing, and then let's face them head on because that's the best way to squash them.

"YOUR INCOME WAS AT THE POVERTY LEVEL THIS YEAR"
That was a comforting answer that a banker gave to me when I was a single girl living in New York City. I'd had roommates for years, and was in my first single apartment in my first year of business. Hey, I had income! I was paying the rent! And even getting monthly pedicures! I guess poverty looks pretty good from here! 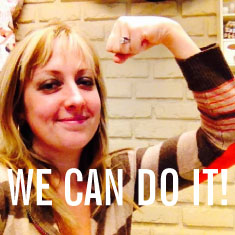 This was in the days before the housing bubble burst, and brokers were giving away mortgages. You could state your income (ie, just make it up) and saddle yourself with a $400K mortage. Yippie! In New York, owning an apartment can be ideal because the value of it no doubt will increase. It's like buying a stock, but with more hassle and headaches. ;)  I'd been talking to a banker for a few weeks about a property, and when we finally got serious, and he filled out whatever it was that he needed to fill out, he called me shocked, with that lovely obvservation: "Your income was at the poverty level this year." Thanks.

So yeah that hurt my ego a bit, but it showed me a few things:

"AFTER TAXES, I ONLY MADE ENOUGH TO COVER DAYCARE EXPENSES"
This is usually a woman's problem. And it's really not a problem, although women tend to see it as a problem and a sign that they should not be working. I disagree with my whole heart that this is a problem. This is an accomplishment. And perhaps a sign that you should increase your prices. Here is why daycare or other forms of childcare is great:

WHEN TO THROW IN THE TOWEL
This is not an easy answer for an entrepreneur to face. You've started out facing a challenge, and it's in your DNA to master the challenge and profit from it. Of course this answer is relative to each individual, so there is no definitive answer. But before you throw in the towel, ask yourself these questions:

HEALTHY HABITS I'VE LEARNED TO KEEP
Over the years, I've learned to keep healthy financial habits, so that come tax time, it's as easy as sending my accountant a few files and my hubby's W2s.