Someone I Love Called Me A Workaholic. Am I? And Am I OK With That? 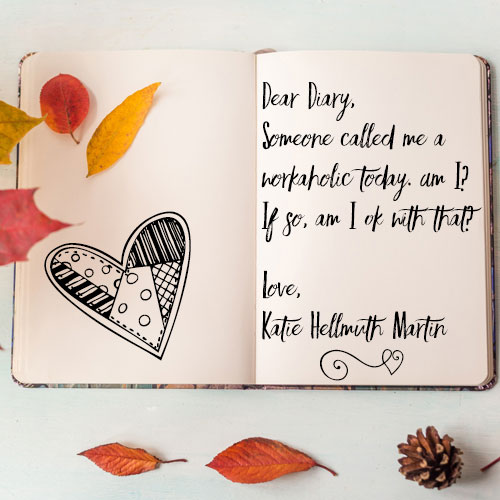 My family and I were going to embark on a weekend getaway to Maine to visit family. A real short trip. We don't like leaving at night, and I have come to accept that I plum fall asleep at 9:30pm, so I am of no use driving late nights. Or, for that matter, chatting in order to keep anybody awake who is driving.

As much as a young family has reduced my working hours, it has giving me new boundaries and a shut-off time where I stop working. As a single gal, I could work all morning, through lunch, and then straight through dinner without making anything yummy. The only thing pulling me off of the computer would be a TV show. Now, I pick up my kids from their programs at 5:30, we make snacks, then dinner, then I clean the kitchen while they play, then we all play, then PJs, and then we go to bed.

So when it was 5:30pm on the Friday of our weekend getaway and my husband called me a workaholic as he walked through the door after picking up the kids from school, because I had not packed the kids or fed them dinner and I was moments away from being "done" for the day, I was shocked and saddened. Over the last 5 years of having kids, I have tried not to be a workaholic, and to be in the moment with my kids. That means shutting down work at 5:30pm, getting up super early so that I get a few more moments in (or at least coffee in peace) before they wake up. Limiting my cell phone and social media time to when I am not with them so that my head isn't always down in a device. It has meant I don't read as many articles as my friends do, that I don't participate in as many Facebook groups as often, and of course, the physical limitation of how much I can produce in a day.

Here's some background: my husband works late nights, and if he gets home at 5:30pm, that's pretty out of the ordinary. He also has a poor track record of leaving early when he says he's going to try to. So when he told me that day that he'd try to come home early by leaving at 3pm, I didn't believe him, and I just went with his flow, not wanting to tell him that we'd probably leave at 7:30pm or 8pm. When he did call me at 3pm to say he was coming home, I was surprised, but I was so far on track with my scheduled day to finish right on time - 5:30pm. Apparently, when he called to tell me he'd left work early, he also told me that if I got the kids packed and fed, then we could just leave right away! And apparently he heard me agree. I don't remember this, and I won't deny that I may have been answering emails or writing an article when he was talking to me, which meant that I was smiling and nodding and not paying attention. I can't deny this, but I won't admit it. I can only admit that I didn't hear the part about packing and dinner.

Which makes this accusation of being a workaholic a little less clear, because a misunderstanding happened. He thought I agreed to shut down at 3pm, which is how long it takes to pack and feed kids in order to leave at 5:30pm, and I thought it'd be super helpful if he picked up the kids at 5:30pm to let me press the final send button on a newsletter, but I never expressed that.

But am I a workaholic? During my workday, I hardly play with anyone, or talk to anyone out on the street. I pound the keyboard pretty hard and fast to get as much done between my jog and stretching in the morning (unless it's too cold outside), and the 5:30pm cut-off time. Because I have created my businesses, I love them. I love working them. I don't mind the challenges that they bring because they are usually a puzzle that I try to solve. I love feedback to products I've created to see if I have created it the way that works for someone in a way that they need it, and if it impacts their life or business.

A business friend and Tin Shingle member Kiki Rupert, creator of Honest Earth Candle sent us this comic via Twitter which was perfect: It's a guy on a beach with his laptop telling his wife that he works to relax. 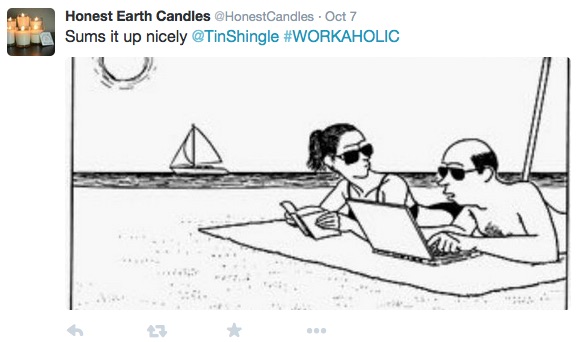 I actually agree with that statement. I do work to relax. Working in Excel, for example, gives me great joy. It's like knitting if I were to knit. Only I don't do macro formulas yet (I can edit them, however). Working relaxes me because I like paying the bills. I like doing things right. I like having money to go shopping or to get a haircut or to get my dog a blowout. I like being on time with my taxes. I like selling things to people who really want it. This all gives me joy.

Over the years, however, I have tried very hard not to bring my laptop to the beach. I see sales webinars from people who do this - tell you how you can work from anywhere in a lavish lifestyle - with a laptop next to a glass of champaign poolside. And that is where I have drawn the line. I don't want to work with a glass of champaign poolside. I want to talk with my friends and husband while drinking a glass of champaign poolside. I don't want to work on vacation. I used to work in the car while driving to vacation, tethered to my phone's hotspot. If it's just me and my hubby, I guess this isn't so bad (though we do need the time to talk to each other!). But with kids, I really don't want to. I want to look out the window with them. I want to get them an applesauce without spilling it all over my computer. I don't want to feel stressed out if they are asking me questions, but I'm trying to write an article (impossible) or enter bookkeeping (really not smart).

So...I'm going to say...If being a workaholic means I love to work, then yes. I am a workaholic. But I have built my life with boundaries now that I am a parent, and I think that anything-aholic means that you can't quit. But I can shut down this computer to pick up my kids - as per my schedule - and start a night with them.