How to Send an Update to Facebook Page Fans (You can't) 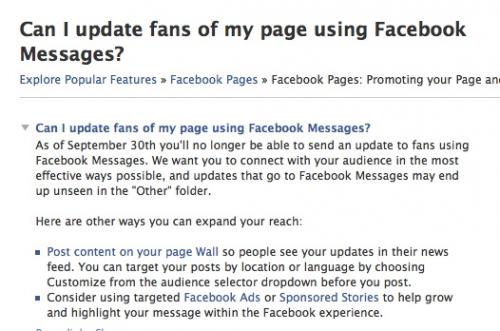 In truth, the "Update" feature was most effective in the "Group" method, that many businesses used before "Pages" were invented. When you corralled your contacts into a Group for your business, you could send a message to them, and it would go straight to their actual email inboxes (as opposed to a Facebook email). Pages offered the Update option, but that message went to a totally different place in Facebook that was never checked (at least, that was my assumption). Facebook confirms that, as they included it in their reasoning for disabling it: "...updates that go to Facebook Messages may end up unseen in the "Other" folder."

Thanks Facebook for looking out for us (and for making it a tail-chasing mission in the first place), but there you have it.

The targeted ads are a more direct way to go, that could offer you more promise, but it's a bummer that you can't also send the Update.