How to Grow Relationships With the Press on Twitter 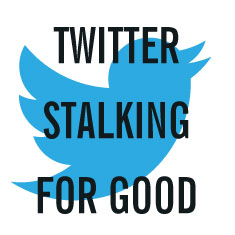 To know me is to know I love Twitter-stalking the press, and I say that in the most sincere and strategic way.  Creating authentic relationships with the press and getting to know them (as well as their likes, dislikes, their style, and their voice.) is integral to your buzz building success and getting to know someone on Twitter helps you do this exponentially faster than any other tool I know. On top of that it's free, and the Twitter "sandbox" is a world anyone can play in, no matter if you're in Kansas City or New York City.

That said a lot of us get into an "analysis paralysis" zone when trying to figure out how to use the social network to strategically build these press relationships on Twitter.  Use these tips to get you pointed in and moving along in the right direction!

Do an "audit" of your current press target list and cross reference it with your Twitter feed.  Are you following the editors, producers and bloggers that you're currently pitching?  Is your dream to be in the New York Times?  Check out the editors who are writing the stories you want to be featured in and hunt 'em down on Twitter.  Want to be in a specific press outlet - let's say on the Today Show - but you're not sure who you should be connecting with on Twitter?  Type in the outlets name in the Twitter search box and on the left hand side of the page narrow it down to only show you "All People".  You'll quickly get a list of people associated with this outlet (including producers, contributors and so forth).  Find the ones that work for your brand and story and start following them!

Master the power of lists!  They're a great way to "peek behind the curtain" of the Twitter relationships and strategies of those you admire and already follow, get ideas regarding new people to follow and really see the topics and people that a press target is so interested in that they created a list of them.  There are two types of lists you should check out via the Twitter profile of a press or "influencer" target when you go to the profile page.  The first is the Lists that they are "Subscribed To".  This will help you see what they're interested in as they either created these lists or chose to follow them.  This is something they did on their own so it gives you great insight into their mind, niche and interests.  The second type of Lists you want to look for are their "Member of" lists.  These are lists they have been put on by someone else.  These are strategically important to check out because by looking at them you'll see others in their field or niche who are categorized similarly and could be other potential targets for you to check out and connect with via Twitter.  Don't follow everyone on the "Member of" lists, be discerning, but do let it guide you to new and interesting people who may care about your business and story.

Take baby steps to a Twitter "relationship" if you're not sure how to start out.  For some of you it may be easier to follow them silently at first, and that's just fine.  It helps you see what and who they tweet about and with, and by simply following them you're already learning about them.  Then perhaps you can ease into a conversation by retweeting something they said (only if you truly found it interesting), you can comment or reply about a statement tweet they made or you can use the Twitter forum to reach out to them and compliment them on a story.  Don't worry if they reply or not (though they probably will), the act alone of reaching out authentically is enough to get the ball rolling.

Do not ever copy and paste the same Twitter message to multiple outlets or Twitter feeds in the hopes that one of them will write you back.  This is actually working against you because when you reach out to them and they see your own Twitter feed and see that you've been sending the same identical tweet to several others they see that you weren't authentically interested in them and they're highly unlikely to follow up.

Make sure you "have your face on" Twitter wise and don't have a naked Twitter stream for them to check out.  What I mean by this is be sure that when you begin creating Twitter relationships and conversations that you have your own Twitter page, from your biography to your images to your news stream is something you'd be proud of.  When someone looks at your news feed they see the conversations you're having, the things you're saying and the people you're talking to.  Is this something that speaks well for you and your company?  Does it truly show your brand story the way you want it to be told?  Give your Twitter profile page a once over and be sure the answers to that are a big "yes"!