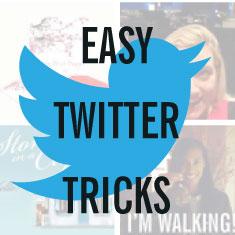 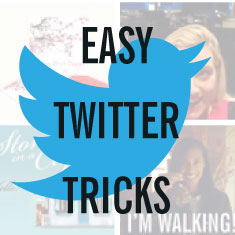 Twitter is a place of constant evolution. It is a story-telling platform, where you and the people around you are spinning the tales of what is important to you and your business. Since it's so easy to write a tweet, it's time to revisit what is working and not working, and go over some best practices as of May 2014. There are a lot of fun new stratetic possibilities available to you on Twitter, and they are opportunities you can be utilizing right now!

WHAT DOES YOUR TWITTER STREAM SAY?
Step back for a minute, and visit your Twitter account. Pretend you are a fresh reader who is new to your business. What do the tweets say? Are they related to each other? Or are they disconnected because you are weaving in personal tweets? It's always been recommended to have a second Twitter account for your personal handle, where you can dish on your favorite sports teams and pictures of what you made for dinner.

Visit the Twitter stream of an account that constantly inspires you. Read down their list of tweets, and see if it tells a story of their brand. Do you get an idea about what their business is involved in right now? As you evaluate your Twitter account and the way in which you and your staff tweet about your brand, consider these strategies for a well-rounded Twitter handle that others will want to follow. Your answers should be YES to all of these questions:

SPEAKING OF RTs
I used to not be a fan of RT (retweeting) because I grew annoyed of accounts that I followed that RTed all of the time. I didn't appreciate seeing logos of others who I didn't follow, and reading their opinions. Therefore, I manually RTed when I wanted to repeat something that was said. And I'm still a believer in that because it shows a personal touch, and I always include a short word or two before my RT.

I've slowly been coming around to the official way of RTing, which does get your account brownie points from those websites who literally count RTs to see how influencial your account is. However, what I am liking the most right now, is reading RTs. And when I say "official" way of RTing, I mean clicking the Retweet button from Twitter's website or their app.

PHOTOS MAKE YOUR BRAND SEXY
Photos can create lust for your brand - or they can completely turn someone off or bore them. Take the time to upload a photo to match a tweet you are sending. If you are using pictures to illustrate articles, use them to illustrate your Twitter album. If you're using a bunch of stock photography, this may not translate well for your brand because it's a generic photo. Step back and look at your collection of photos in your Twitter album. Do they give a reader the impression you want in the first second of viewing them? The photos display like this in a collection on your timeline: 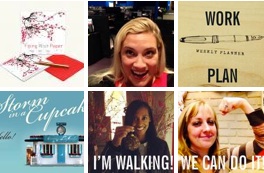 This is a collection of our latest photos from the Tin Shingle Twitter account. Keep in mind that Twitter turns them all into squares and will crop out whatever doesn't fit in that square, so to make sure that color fills out the whole square can be important for our collection. We have also been using a graphic style on pictures we use to feature articles in our free newsletter, #SmallBizGoodness. These pictures are translating well in our photo collection.

BUT WAIT - WHERE DID THAT PHOTO GO?
We are still confirming this, but it seems that photos added from Hootsuite or Facebook are not being added to your Twitter photo album. If you compose a tweet in Hootsuite and it includes a photo, it will post to Twitter with the pic link for people to see the photo in your stream. BUT, the photo itself will not live in the photo album collection I mentioned above. This also happens if you publish a picture on Facebook. It won't be included in your Twitter photo album. This is something to think about when you're pre-scheduling tweets that have photos in them. An easy fix is to post tweets from Twitter itself. Also, as of last year, you can schedule tweets in advance!! Here's the how-to guide on how to schedule organic (aka free) and paid Twitter ad tweets.

FACEBOOK PHOTO UPLOADS - THE LAZY WAY IS HURTING YOU
So you're posting photos on Facebook, and they auto-post up to Twitter, saving you time, right? Well...if you didn't even write a caption with your Facebook photo, then you'll get a glaringly ugly "I posted a pic at Facebook" Twitter update, which tells your reader nothing. If you only do that and never tweet anything directly from your Twitter account, as a new reader checking you out, considering if I want to follow you, chances are I will not, because your feed will be boring. How do you solve this? Definately write tweets that are unique to your Twitter account, and also write a caption in your Facebook photo upload (at Facebook).

DEAD ACCOUNT TWEETING
Are you actually providing news and information? Or are you stalking people. By stalking people I mean are you tweeting the same thing 20 times to different accounts. Please tell me you aren't doing this. I know you want to reach out to people, but if you reach out with this tweet, you may not have many friends:

"Hey @TwitterPerson watch me on NBC tomorrow 10am!"

"Hey @ReporterPerson, I have a great story for your readers, visit my website to learn more!"

If I'm a new, potential follower visiting your Twitter feed from your website, and I see these types of tweets, I have zero desire to follow you. If I'm a reporter or in the media checking out your Twitter account, I'm thinking that my readers or viewers definately don't want to see your account, and also that it looks like spam.

Instead, if you're trying to reach out to reporters, consider following these 5 Tips for Building Relationships With Reporters While Keeping a Fun and Engaging Twitter Account that makes your branding even stronger.

Twitter is changing it's look probably to keep in line with other social platforms. It's probably for the best, so as to create uniformity for the user and make using the website easier and more familiar. It looks like a Google+ Page mixed with a Facebook Business Page, with the font set really big for people over 40 who need reading glasses. Here's what you need to know:

Logo: New logo picture is 400x400pixels. Your current logo picture may have been originally big enough to transfer correctly.

Cover Photo: New cover photo is huge, at 1500x500 pixels. Your current photo may not have been big enough, and may have blurred if Twitter automatically converted it.

Special Tweet: You get to pin a tweet of your choice to the top of your profile. Change this regularly to guarantee new and exciting information. Don't just leave it as an About Us type message or a mission statement. Show your best stuff, hot off the presses! To select this tweet, you'll be able to click a button near each tweet that says "Share via Email", "Embed Tweet", or "Pin to your profile page". You want the last one.

Fear not, this is a drastic change especially for your cover photo, but editing your Profile is a lot easier. You're able to change things like your bio right in the page, without going to a special profile page. Sure, your background is now gone, but now that's one less thing you have to redesign! (Confession: I'll miss it)

PROMOTED TWITTER ADS
Have you tried Twitter ads yet? They are very fun. We are going to focus on them a bit more in another article, but know this: you should try it. You will reach lots of relevent people via the different targeting methods. Twitter also does a great job educating you about how to make better ads, and how to better target them. They even have a support staff who is eager to talk to you and help! Unlike when Google Ads came out (they have support now), and Facebook Ads - does anyone even work at Facebook? ;)

LIVE TWEETING
Yes yes yes, do this too! Twitter is trying to own everyone's attention while live events are going on, from TV shows to concerts to lectures. By Live Tweeting, your Twitter account will be part of a streaming conversation in realtime, thus introducing your Twitter acount to others who are also participating in the conversation. As for your current followers, I'm not sure if they will appreciate the barrage of Live Tweets you are putting out in a given moment. So be sure to balance it. When you live tweet, follow these strategies, and also keep this in mind: