How To Create, Sign Up For & Start a Periscope Account - The Nuts and Bolts of Broadcasting Live 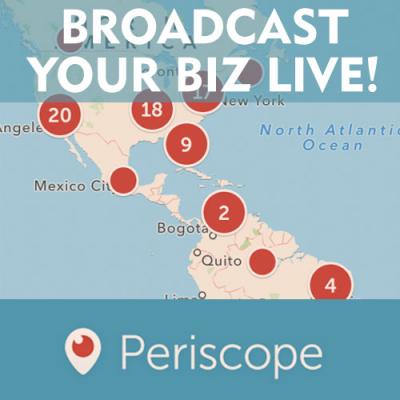 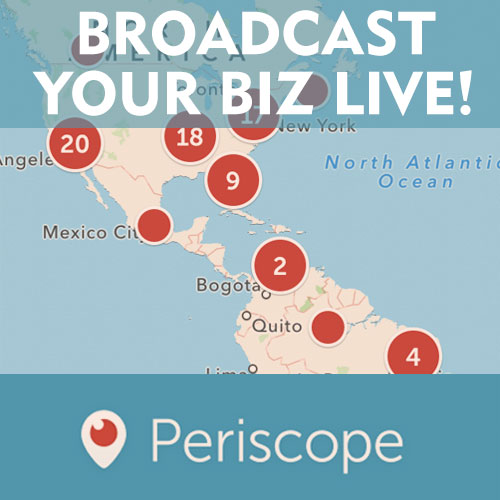 At last, live streaming is easy! With early applications from Ustream and others not quite giving us an "easy button", Periscope has brought live streaming to an app near you. Periscope is not the only app in this game - Meerkat is another choice, but Periscope is now owned by Twitter, so has a wider reach for instantly building your community. This article serves as a guide to starting your account on Periscope to start live broadcasting.

STEP 1
Download the Periscope App from the iTunes Store. It’s best to do this from your iPhone by searching for the app called Periscope. It is easy for you to sign in with your Twitter account, even if you have multiple Twitter accounts. Full directions are here from Periscope on what happens after you launch the app.
UPDATE (May 2015): You no longer need a Twitter account to create a Periscope account, but there are a lot of benefits to doing so.

STEP 3
Pick some people to follow. Periscope will make a few suggestions. Follow me - I am at katiejamespixel and my partner at Tin Shingle, Sabina Hitchen, is at sabinaknows. When we live broadcast tips and tricks, we do it at Tin Shingle's account, tinshingle. Let’s connect!

Watch a few Periscopes to see what people are doing. To watch, you will simply click on the titles of Periscope videos that have been broadcast in the last 24hrs. Periscope is still pretty new, so there are a lot of shaky cameras, not very well lit rooms, blurry heads, you get the picture. Even big brands like NastyGal, Marc Jacobs and Periscope’s own account may hand-hold their cameras at times, causing you to experience the shakiness of the camera-person trying to plug the phone into a tripod.

The button you want to press to begin a broadcast is the little camera with the red dot at the bottom of your screen when you are in the Periscope app. It is so small, you might miss it. It looks like this: 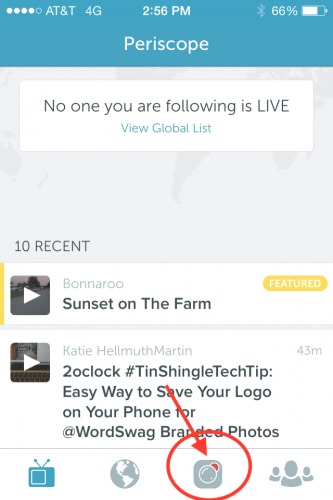 Once you press it, the red "Start Broadcast" button will appear, and you are prompted to write in your very important title. Here is what it looks like: 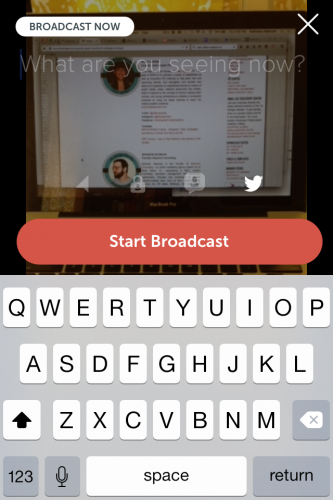 Naming your broadcast is an important step because it is what will attract your audience from their Twitter feeds into your live broadcast. If you did not connect your Twitter account to your Periscope account, the broadcast will not automatically tweet the broadcast for you, which is how you get viewers. When you start your broadcast, people who follow you see this title on their phones, as it pings them like a text. Write an engaging title with hashtags. The title length should be as long as a tweet. In other words, 100-140 characters. Keep it short yet informative.

After you have written your title with hashtags, press the Start Broadcast button and start talking! I have included a few more basic tips for you below to help you navigate your way through your broadcast.

COMMENTS, HEARTS & HECKLERS
People can comment to you during your live broadcast. You and your audience can read the comments. People can also give you fluttering hearts while you are talking. Hearts are given by other people who are tapping their screen while you are talking because they like what you are saying or showing. Because Periscope is so new, there are a few troublemakers who may try to get a rise out of you by saying inappropriate things. Ignore them and keep going! If you can't ignore them, just pretend they are those two old man Muppets who sit in the box above the stage and heckle the other Muppets. 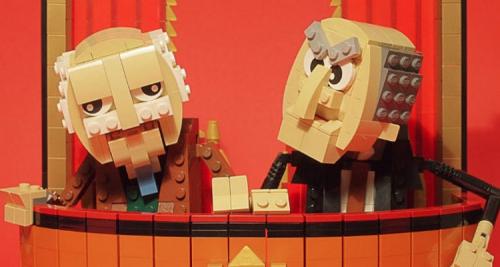 Photo found at BryanShaw.com, who is in awe of the
builder of Statler and Waldorf, grubaluk.

HOW TO POINT THE CAMERA IN THE RIGHT DIRECTION
You can have the camera filming your face, or filming away from you. To change directions of the camera, double tap on the middle of the screen.

HOW TO END THE BROADCAST
To end the broadcast, place your finger at the top of the screen and drag it down about half an inch. This will present you with a red button that you can tap to turn off the broadcast.

HOW TO SAVE YOUR VIDEO FOREVER
To save a copy of the broadcast to your phone, click a link at the bottom of the ended broadcast that says “Save to my camera roll”. Be careful though, because if you click in the wrong place, you can accidentally stop the uploading of your live broadcast into Periscope for replay for the public during the next 24hrs. You can then upload that video to YouTube from your YouTube account.

HOW TO DELETE A VIDEO
If you change your mind about making your video available for the next 24hrs, you can tap on your video and Delete it. You can also tap to hide the comment stream that happened.

VIDEO BROADCASTS ARE PUBLIC, BUT YOU CAN MAKE THEM  PRIVATE
Your video is public, but you can adjust your settings to be private. But since you’re reading this on Tin Shingle, we are all about getting the word out about your business, so you’ll want to make that video public, most of the time.

WHO SEES THESE VIDEOS - WHO ARE THESE PEOPLE?
The people who are seeing it are people who click on a link they see in Twitter, or people who are searching in Periscope for types of videos. When you have followers, those people are notified via a ping to their phones that you have started a broadcast. It’s like getting a text from you. People who are not following you yet may be on Twitter refreshing a certain hashtag. If you use a good hashtag in your title, then a link to your Periscope may show up in their Twitter feeds, and they will click on over to watch you. These folks can click from Twitter and watch you via their desktop computer, or their iPhones.

WILL PEOPLE KNOW MY LOCATION?
Yes, unless you can choose to not enable your location. By default, your location will be shown. If you do not want your location shown, then un-select this right away when you are setting up your account or in your settings. Read Periscope's Privacy Policy.

B.B.B.BUT WAIT! I AM SCARED!
That’s ok, Sabina Hitchen, co-founder of Tin Shingle, has written an article dedicated to the strategy behind your videos, how to build a following and how to engage with your viewers that you will definitely want to read if you haven’t already.