Is Facebook's Call to Action Button Working and Worth It? 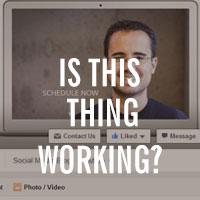 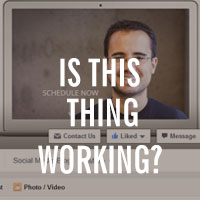 At first blush, some businesses are seeing no results. Alexis Moore, founder and CEO of Blackstone Marketing Group in Sacramento, CA, says: "I didn’t think much of it when it popped up early on because a person can just as easily click on the facebook user’s web address or do a quick net search to locate the product or service direct (using the Facebook about criteria)."

True enough. This is the premise where, if information is somewhere on a page, albeit further down and to the left on the screen, a person will find it. But does a person have interest in finding things? Shouldn't a Call to Action button make this easier for them, and more at-the-ready? Yet, Rocky Shepheard, founder and creator of The Vegg, a 100% plant-based egg company, added the "Shop Now" button for his 12,000 fans to take action on his company's Facebook page, yet has seen "no clicks at all" in the first two weeks since adding it.

ShortStack, a campaign-building tool that gives businesses a clear picture of their customers and opportunities to engage with them anywhere, designed their entire Facebook page around the small Call to Action button. Sara Piccola, Mistress of Propaganda for ShortStack, says that ShortStack started early with the Call to Action button. At first, they opted for the "Sign Up" button and had it lead to the home page. Simple enough, but considerably wimpy results.

ShortStack then made a shift in direction that doubled the clicks they saw from the Facebook page. They changed the Call to Action button to be the "Contact Us" button because they wanted it to point to a specially designed landing page they built that let people sign up for a demo of their software. On the Facebook page in the Cover Photo, ShortStack added a simple white arrow that pointed down to the "Contact Us" button. Not only that, they added the face of the guy you're ultimately going to talk to about your demo, "Adam", to be the face of their entire Facebook business page.

One could debate the semantics between "Sign Up" and "Contact Us", and that a person who is filling out a form to sign up for a demo would fall into the "Sign Up" category. But "Contact Us" is more personal, and after all, one is contacting the company to request to see more. According to Sara, "the clicks on the Call to Action button doubled from what we were seeing with "Sign Up". 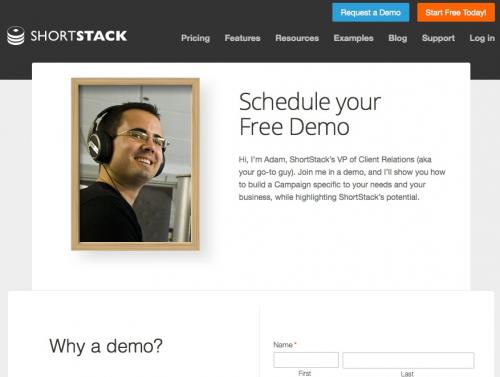 Another company, BodyLogicMD, a hormone replacement therapy group, has seen a 60% increase in referrals from Facebook after going with the "Contact Us" button on their Facebook page. "So far, directing fans to our 'Contact' page has worked quite well. Like most businesses, these contact form completions are the primary goals that we measure, so anything we can do to increase signups is well worth it."

Shoreway Media, a social media agency based in Northeast Ohio, is seen very little results with the standard use of the Call to Action button. However, one area where Shoreway Media is seeing "signs of life", says their founder Sandro Galindo, is for their cinema clients. For those with movie trailers, Shoreway Media has been uploading trailers and adding the "Book Now" Call to Action after the trailer, and viewers can buy tickets from the trailer in Facebook.

As for concrete conclusions for the Call to Action button...I would have to say, as with all things Internet, for any results to happen, or at least en mass, the path presented to the reader has to be so intuitive, that they don't even realize that they are thinking about where they are going. It's a simple concept that is not always easy to set up. The Call to Action button, when used with the Cover Photo, may help your audience take the action you want. Also, the "Contact Us" button is commitment-free for your reader. They aren't locking into anything like they think they are with "Sign Up" (for what?) or with "Shop Now".

At the end of the day, proceed with thoughtfulness and time, and track and analyze everything you do.

If you're curious about how to set up the Call to Action button on your own page, this article explains how to do it quickly and easily.