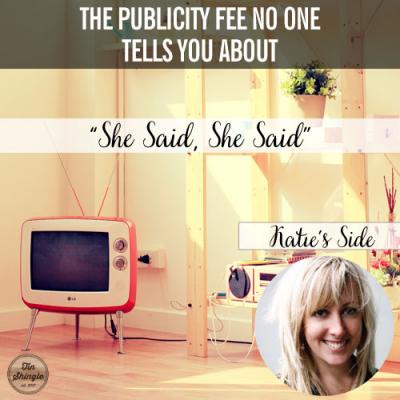 Common knowledge in the publicity industry is the pay-to-play model, where people on TV who are showing his or her recommendations, may or may not have charged a fee to that brand they are featuring in order to show them that day, or in that print story. Same thing could happen at a blog, website or magazine. Entrepreneurs and business owners who are new to the world of publicity are usually surprised when responded to with a fee request, and are either happy to pay it, or decide that route is not a fit for them. Tin Shingle co-founders Sabina Hitchen and Katie Hellmuth-Martin are exploring this situation in a 2 part article series called "She Said, She Said." This article is Katie's contribution. Click here to read Sabina's side of the story.

The true meaning of press is validation, right? A major media outlet features a business because they know their readers will love to know about it. Usually, but not all of the time, sales follow in the wake of that press. So the business owner gets two things from a feature in the media: validation and sales. When money is exchanged for being featured, the validation portion of that equation changes a little bit. And that is what my points will focus on in this article.

Writing this article is hard, because we are actually saying that sometimes, not all of the time, but sometimes, the products you see featured on TV are there because the people behind the camera received a fee from the business to include them in a roundup of amazing things you need to buy. As a viewer or reader who is not part of media production, most people don't think about that. There is a lot of work involved to make a product, market it, pitch the right people in the media, have those people really like your product, and then DOH, someone somewhere does charge a fee to pay to play. This can impact the validation aspect of a great press feature, but at the end of the day, no one really knows that happened, and the world is so excited your business was featured, and your inbox may or may not be filling up with orders.

"Amazing" Is Still Key - Despite Pay-to-Play

When money is exchanged, a feature turns into an advertisement, in my opinion. It is no longer is pure press. But it is also not declared as an ad, so viewers are not aware of this. This is the part where I take a deep breath and say...yeah...it is not following FCC regulations of not being stated as being paid, and...I am going to back away slowly. Despite any fee, the folks behind the camera know that they must impress their viewers. So when this fee happens to some segments or blog reviews, the product still must be amazing. It is not a straight up commercial or infomercial where a company bought airtime, which gives them control over what is featured and how.

It is no secret that the media in all forms - print, TV, website, apps - is creating new ways of earning money. We are in a period of change, and frankly that period has lasted for a number of years and shows no signs of slowing down. Thanks to technology and different ways of reaching people, the media has new ways to entertain and inform you, and to charge someone somehow for that, in order to stay in business. Your local Free Press can't stay free and never have ads or charge anyone, because no one would pay the press people to show up, and then they wouldn't have a house or dinner or decent clothes, and the media as we know it would not exist anymore, and you wouldn't know what was going on from credible sources. Just Facebook and Twitter blips of people thinking they heard something about something.

Having said that, with major magazines weaving in paid placements into their roundups of Mens' Shirts for Fall, having pure press that a media source featured without any money exchanged gets to be even a bigger deal. The validation is even stronger than it has been before. Your business or initiative or organization is that important that it must be talked about despite any revenue touching it at all.

Advertisements Are Getting Better and Better

Just like a press validation is getting better and better, so too is advertising. One can't have lame advertising floating around when there is sexy branded content being pushed by media producers. There is also no denying that advertising works, and that you learn something new. Examples:

Is Pay-to-Play Sneaky? Or Just a Way of Life?

Well...both. And life goes on! Pay-to-play is not the only way to play, and that is why I don't pay it much mind. Technically, I should have told you about an ad that is in this article. But it would really disrupt the flow, and, it was an honest pick. Can you find the ad?

Answer: The ad is the link to the Lalaloopsy Baking Oven. In case you wanted to see what I was talking about, or maybe even buy it, I included a link to Amazon for your convenience. But what I also have at Amazon is an affiliate account, which means that if you buy that oven from my link, I get a very small commission. Yay! But if I am getting any money from it, you would probably want to know, right? It might influence if you trusted my recommendation, right? But...it's so small, that need I bother? And the recommendation is the truth, I really did buy it for Christmas after seeing it once on Cartoon Network.

The decision is yours, my friend. Our job at Tin Shingle is to let you know about it, so that you are not surprised or offended if you are approached with, or if your pitch is responded to with, a pitch right back at you for a fee.

But I will say this...Oprah's Favorite Things did not become such a huge, respected list because anyone paid. And that is a lot of validation that everyone involved can profit from.