Press Release Vs. Pitch, Which Do I Send? 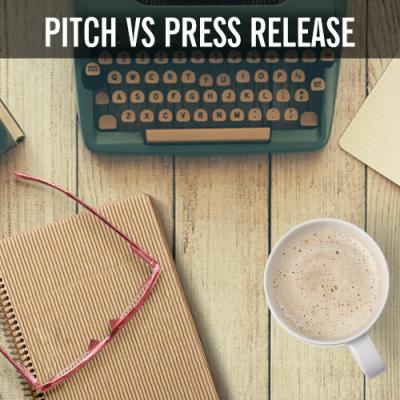 Ah, press release versus pitch, one of the longest running rivalries in the PR game. A new spotlight has been shining on it as of late because of so many articles proclaiming "the press release is dead!".  It isn't - by the way - not yet. That said, small business owners and entrepreneurs can get tripped up a bit here and there when trying to decide which to use to get their message out there, and they often err on the side of "let's just write a press release about it", even when it's not necessary.  This leads to extra time and energy spend on creating something they don't even need! To make the distinction and strategy behind each of these PR tools a bit clearer I'm breaking down the "what" and "when" of them below. If you want to get even more strategic advice on how and when to use a press release join me for free, live this Thursday in a live #TuneUp webinar dedicated to press releases!

Let's give a brief breakdown of each tool:

Press Release: An official document, a news announcement. You're releasing new and/or breaking newsworthy, information to people who could use it and will find it of value. These are written in official, journalistic copy, in the third person. They are not personal, not filled with superlatives and not using "I" language. There is an actual specific "anatomy" to them which we'll be discussing in the upcoming TuneUp. A well-written press release is so newsworthy, so clear on the Who, What, Where, When & Why of the story, is so complete to the point of including a relevant quote or two, that someone could lift it and write an entire story about the news without even talking to you.  That being said, a press release is not the actual story, it's just all the facts, in official and clear language, it's not your debut novel. You are not the reporter.

A Pitch: A pitch is a customized and personalized email or phone call to a specific member of the press, and it tends to be more conversational than a press release. In that, you share just enough clear information to interest them in following up to consider you for a story. Just like a press release you're going to be giving them the Who, What, Where, When and Why (in this case, Why should they do a story on you should be illustrated in your pitch) but you're not going as in depth.

The pitch is the teaser, the press release is all the information. The pitch allows you to be more specific and reach out about something even if it's not new and newsworthy. In all honesty, you could stick to pitches all day long and get all the press you want (if you're writing the right kind of pitches) but it doesn't hurt to have press releases made when something of note happens to or at your company, whether you send them to a member of the press or simply file them into your media kit. Fun Fact: Anything you write a press release for can easily be turned into a short, customized pitch with a few tweaks, but not everything you pitch can be turned into a press release. Think about that one...

PRESS RELEASES CAN BE USED FOR:

PITCHES CAN BE USED FOR:

The truth is, pitches can be used for all the above topics, you just have to tweak the way you're delivering the information and customize it to bring value to its recipient. That said, you can also use pitches for:

Listen, press releases can be powerful tools for  building buzz, you just need to be sure you're sending the right information to the right people in the right format. Pitches ask you to do the same thing, but in a much more simplified manner, and the rules regarding when and how to use them are much less rigid. At the end of the day, not matter which you're creating and sharing to build buzz, it often boils down to sharing valuable content with the right audience. Do that, and the rest will fall into place. Happy pitching and releasing!